Meet Stacey. After neurofeedback training for anxiety, she still gets the grades. Without all that stress.

Stacey needed a new approach to anxiety treatment. She was a terrific student and athlete. Straight A’s. Star on the track team. A very hard worker, she drove herself. Way too hard. She could not stop worrying about her tests and grades. She studied obsessively.

Meds and therapy did not solve the problem

Her anxiety became so severe that she was placed on two medications. These helped somewhat, but she continued to struggle with near-crippling irrational worry about her performance in school. Stacey also had lots of psychotherapy, with little relief. Stacey’s mother came to us after investigating neurofeedback training for anxiety.

Stacey did well with neurofeedback. After ten weeks and 20 neurofeedback sessions, she was no longer taking the anti-anxiety medication and had reduced her anti-depressant dose by half. Her mood was good and her anxiety minimal. Stacey continued with neurofeedback training for anxiety for several additional months and was able to stop taking both medications.  She continued to perform well at school, but without the intense pressure and distress.

Stacey’s parents and her teacher clearly saw the dramatic improvements. We used a research proven symptom rating scale to measure Stacey’s symptoms before and after ten weeks and 20 neurofeedback sessions.  The results are shown in the graph below.

All of Stacey’s scores were normal after ten weeks of treatment with neurofeedback for anxiety: 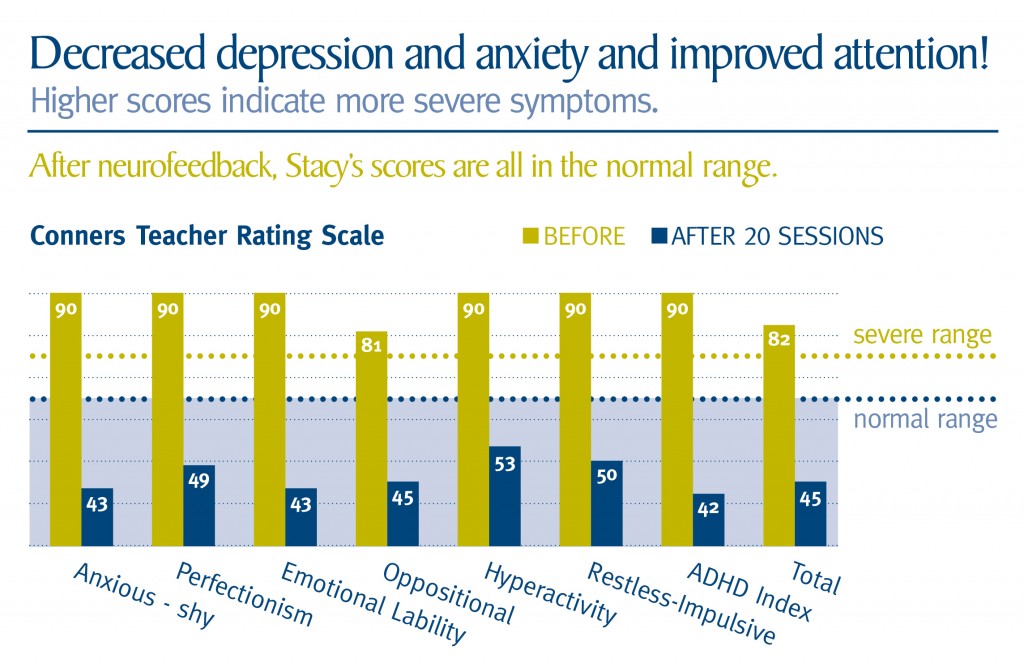 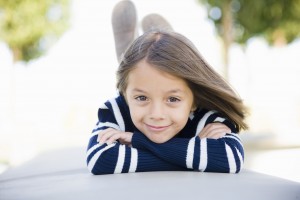 Nicole was a second grader who suffered from very intense anxiety. She had many fears. One fear though really interfered with her life – she was terrified of fire drills at school. This terror became so strong that she was unable to attend school at all:  There might be a fire drill. School professionals had worked with her to help her overcome this fear, with little progress.

Nicole responded beautifully to neurofeedback training for anxiety. After 20 sessions, her symptoms were entirely gone. She went to school every day with out fear. She even tolerated fire drills without any warning. Just like a her friends! Here is how her mother described her progress.

“It is hard to believe that a year ago my family was living in Hell. My daughter was so scared of everything in life and my husband and I didn’t know what else to do for her. The level of stress, fear, and sadness was unbearable. Her anxieties and panics were becoming mine. It is unbelievable the change which has occurred. The confidence she has built in herself and in facing her fears is remarkable.”
– F.P., East Providence, RI.